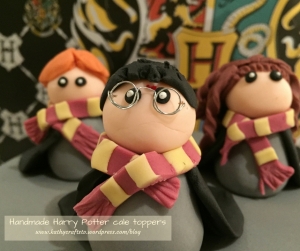 Last week we celebrated my little lady’s 9th birthday. To put this blog post into context, she is an enormous Harry Potter fan. And I mean a fan, to the extreme! For example when she hands her homework in, she puts Harry Potter as her name. (What’s that about?!) And for her creative writing lessons she includes stories about Albus Dumbledore and Hermione Granger in every single piece. Truly she’s a Harry Potter addict.

Not that I mind of course. I think it’s wonderful that at the age of 9 she is reading books she can barely hold up. Coincidentally I attribute her love of books to her former deputy head and year two teacher, Mr Potter! (The love my kids have for that man deserves a blog post all of its own!)

It also makes it much easier to plan birthdays when a child has a keen interest in something. And, being of the belief that ‘Handmade is Best’, I set to thinking about the types of Harry Potter themed gifts I could make for her. 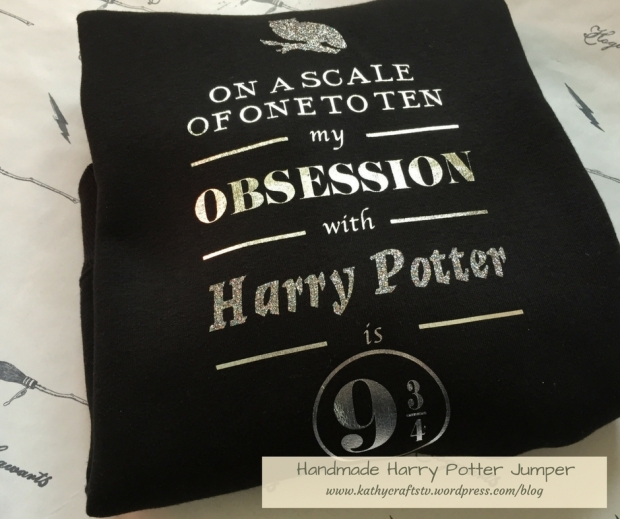 During the run up to her birthday, two very fortunate things happened. Create and Craft launched Harry Potter themed craft items under the Warner Brother’s licence (great timing)  and I went to an Etsy Made Local Christmas fair and stumbled across Little Owls CC whose magical items were perfect for this theme.

I purchased the Harry Potter stamp set from the collection on C&C and knew that I would be able to make a card and wrapping paper. 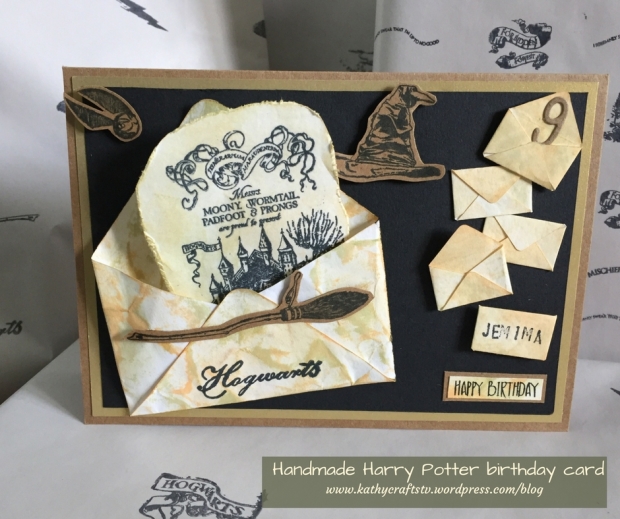 For her card I made five tiny envelopes to represent the letters from Hogwarts, and made one bigger one, distressing them all with marigold and antique paper distress inks. I stamped her name on one of them and mat and layered a Happy Birthday sentiment on distressed paper. For the larger envelope I crumpled it up before adding the ink to make an even more antique feel. I stamped the sorting hat, snitch and Nimbus 2000 broom on to kraft card and fussy cut them out.  I printed the marauder’s map onto distressed inked papers and used a distressing tool to make the edges rough. Finally I added a little number 9 into the top envelope. 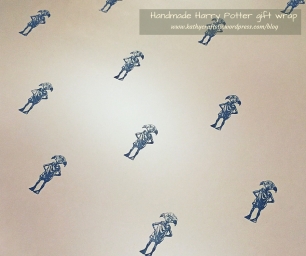 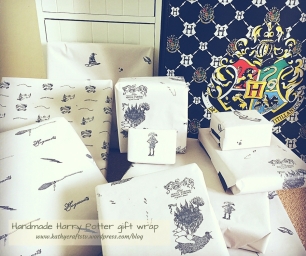 After making the card and gift wrap I gave her the stamp set as one of her gifts so that she can continue to use them to personalise her note books, scrapbook pages and make decorations for her room with them.

I purchased some wands and button badges off Little Owls and we used these as gifts in the party bags for the little gathering we had for close friends the following day. We used the stamps together to add decoration to the brown paper bags to put them in.

But that was just the tip of the iceberg! I made some other gifts, mostly using items already in my craft stash, to give her a Harry Potter themed birthday to remember. 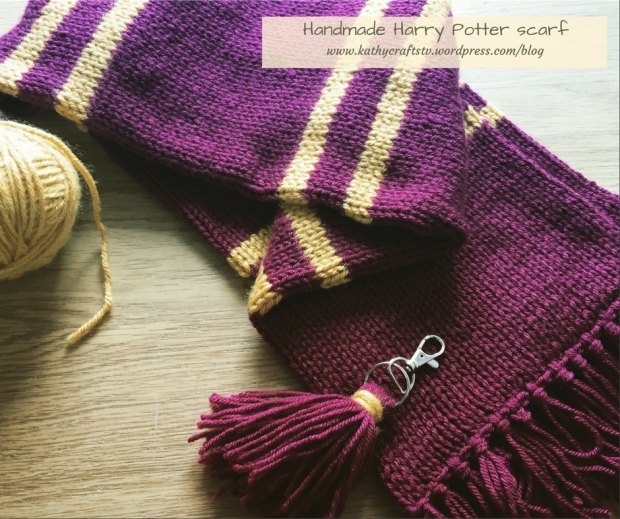 I started by making a Gryffindor scarf. I followed this pattern by Sum of Of Their Stories,  but admittedly I didn’t make it long enough as I ran out of time. It’s plenty long enough as a general scarf but in the films the scarves are ridiculously long! I was pleased with the result though and made a little tassel on a key ring to match.

I used Women’s Institute Aran yarn in plum from Hobbycraft and Cygnet Grousemoor Chunky in Gold from a local wool shop.  I have to say it was quite difficult to get the right colour for Gryffindor house and I’m not sure this is exactly the right one but it’s close enough and I didn’t have any more time to shop around as I (correctly it turns out) feared I wouldn’t have enough time to make it. 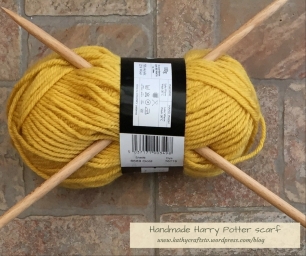 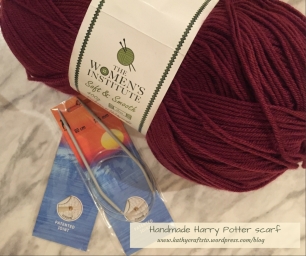 Next I made four box frames for her room. My mom bought her Harry Potter bed linen and a clock and my Auntie got her a lampshade so we transformed her room from Frozen theme – which she was obsessed with three years ago – to something much more suitable for her current obsession. We had planned to do this while she was at school so it would be a surprise when she came home but the school was closed due to the snow. Isn’t that the stuff of dreams? A snow day on your birthday!!! 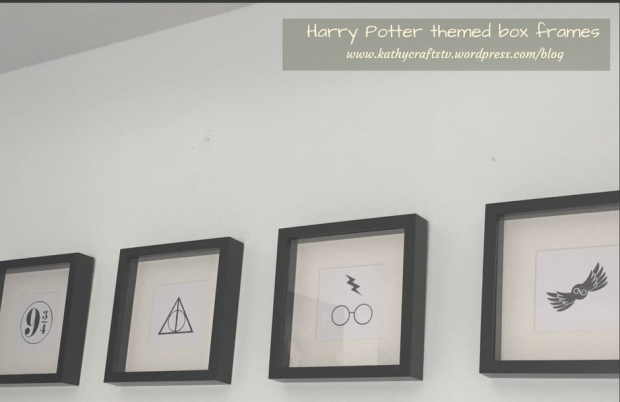 We did do a big reveal for her though and she was delighted with the updated look. 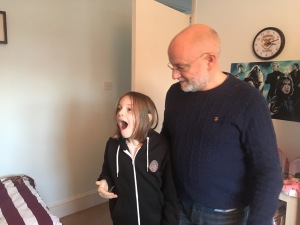 I designed the box frames on my Cricut and cut from white card laying black card behind. I chose to do Harry’s glasses and scar, 9 3/4 –  which is the platform the train leaves from to take the students to Hogwarts – the deathly hallows which is the title of the seventh book, and finally, the Quidditch snitch. I put them in black box frames and my husband hung them on the wall. I think they look great!

I always make my children’s birthday cakes, having been fortunate enough to have personalised cakes every year growing up, made by my Nan. I like to think that I channel a little bit of her every time I get the icing and rolling pin out.

This year I made two cakes as we had a family gathering on the night of her birthday and her friends round the following night. I wanted her to have a candle to blow out both nights and some cake to offer round. Making two cakes I decided to keep it fairly simple, although I was up until 1am finishing them off! I nearly choked when one of her friends asked if they could have a character each to eat! I managed to persuade them it wouldn’t be a good idea and they now await a decorative dome to be housed in. 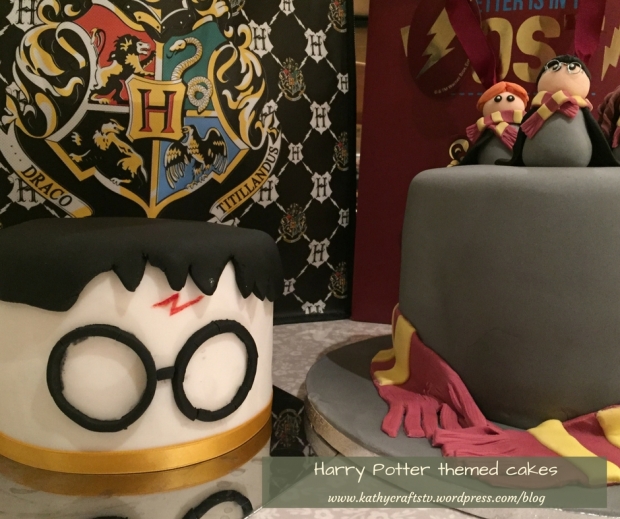 I wrapped the cake with the Harry Potter character toppers in a Gryffindor scarf made from icing, just to give it a bit of interest. The other cake was simply Harry Potter’s glasses and scar with some black icing on top for his hair. Although the black icing was very difficult to work with on the glasses and broke up as I was fixing it to the front of the cake, I think everyone forgave me for that little mishap and it didn’t detract from the overall look of the cake.

Finally, and I think this would be her most treasured gift as she hasn’t taken it off since, is her personalised hoodie! I bought a plain black zip up jacket and added a personalised motif on the back, again using my Cricut with iron-on and glitter. It’s a very simple design so really easy to cut and iron on, but it’s really effective. 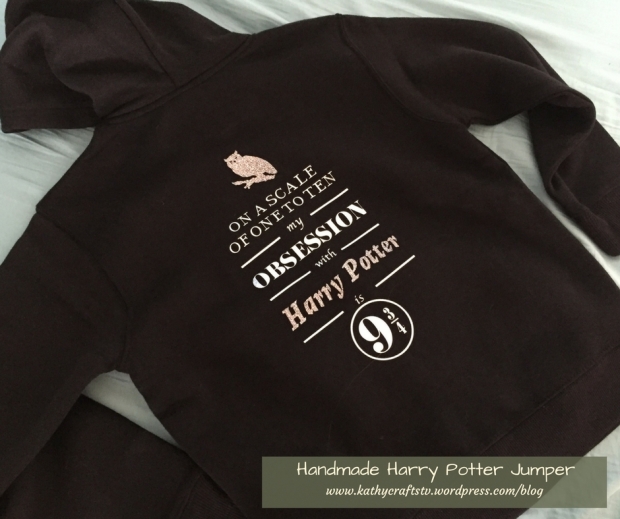 My mum (and my brother it turns out) found some Harry Potter Iron on Patches in Sainsbury’s so I used one of the crests, positioning it on the front of the jacket.

The next project is to add some Harry Potter themed vinyl shapes to her wall, maybe a shelf with potions and spell books and perhaps Hedwig’s cage and some mythical creatures. This is definitely a project for after Christmas as my festive to-do list is growing rather than shrinking. Expect more crafty projects and inspiration from me over the next week or so!

Your privacy is important to me and you have a right to know what personal information is used when visiting or interacting with this blog. You can view my Privacy Policy here.

A passionate crafter bringing Trimcraft and its brands and products to viewers of Create & Craft TV in the UK and USA.